I got this for my stress-eating cat. She liked to stay by her food bowl 24/7 and always asked for food. She'd only eat if she was scared or anxious (which is 99% of the time).Now she eats only when she's hungry because it's too much effort to eat from this bowl all the time. I bought this 2 weeks ago and she hasn't puked since!!I will say though that this is meant for big dogs because it is a huge bowl. Looks small and decieving in the picture. It's hard for my cat to get the food from the bottom of the bowl bc she doesn't have a big tongue like a dog. She will either use her paw to scoop it up or I'll just keep refilling it to the top to help her eat easier.

My dog was gobbling her food, then yakking it back up. This dish works exactly like it states. It slowed her down and eliminated the gobbling. She is forced to eat slower. She's not puked once since I bought it. Which is a really good thing, because even though she is considerate enough to eat up the puked food, it's pretty gross. I mean, she's a real cute dog and all, but between eating literal puke and butt licking... whoa. Stop that tongue right there, doggie. No face licking. Ugh. Oh... but back to the bowl. It's just regular plastic with these swirly nubs, so she has to peck at the food. It washes easy and so far she's not chewed it up. Like my shoes. Or my underwear. Or a used plastic water bottle she found under the deck. 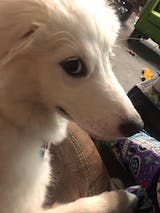 J
J.
My pug is finally getting her waistline back!

My 2 year pug loves to "inhale" her food, not only she throws up sometimes from eating too fast but she was gaining weight! Got this and have been using it for a few months now, i can tell (from the way she looks at me) she isn't the biggest fan of the bowl since it takes way longer for her to eat, but it works! She doesn't throw up anymore and she is forced to take her time to eat and chew. We have been giving her the same amount of food but just changing the bowl makes a difference, I can finally see her waistline!!I do feel bad looking at her eating with this bowl, she has to pick each kibble up with her tough because of her flat face, and kibbles tend to fly out from the bowl, then she needs to circle around the bowl to pick the kibbles up. It is definitely more work for her to eat from this bowl but I have to do it for her health!

I bought this bowl for a cat that gained 1/2 lb this past year. She at times gobbles her food, and then vomits it right back up. Instead of buying expensive vet food, I was going to try this bowl. Well I must say, there was a battle between mom and cat. She did not like the bowl, so she would barely eat her kibble. I do put in a small amt of canned and that got ate. I was not about ready to give into my princess and give her the old bowl. So she ate enough to keep living, and probably lost her 1/2 lb but finally after 3 days she ate most of her kibble. Battle won. My dog that wolfed down his food is doing much better, but he had to bark at me at first, and tell me it wasn't his bowl, but food won out. The dog that I thought would not adapt because he is 8, went right to the bowl and ate. An advantage that I did not see in the reviews, is he has had teeth pulled and at times had difficulty eating his kibble. It was large for him, but he has to have a special food. This bowl distributes the kibble around and has made it much easier for him to eat. He is able to eat a little faster, and enjoy his food. I was worried these bowls would be too big for my small animals but after reading the other reviews I thought they would work. I only feed 1/4-1/3 cup at a time, but the bowl worked out fine. Would highly recommend this bowl, for your small animals. Be prepared for a finicky cat that wants their own way. Be strong! don't give in!

A
A.t.A.
“Significantly reduce the speed of eating dog”

I got this bowl recently and I’m IN LOVE mail. It’s obviously a Chinese made product. On the packaging, one of the benefits listed is: “Significantly reduce the speed of eating dog” (see photo provided). So, this item is perfect, because one BIG problem I’ve been having lately is that I am definitely eating dog too fast. This bowl has been a lifesaver. Now, it’s taking me at least 3 times as long to eat dog. THANK YOU SO MUCH! Highly recommend this item! 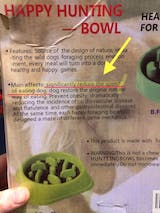 12
Back to Puzzle Bowls